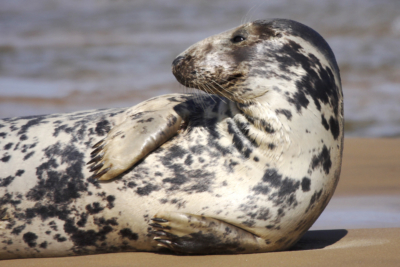 Grey seal pup numbers have broken all previous records at the National Trust’s Blakeney Point, with a month of pupping still to go.

National Trust rangers monitor the colony at Blakeney Point and record seal pups born on this coastal spit throughout the winter. Counts began this year on 1 November when the first four seal pups were spotted during a routine check of the colony.

The reserve is the perfect breeding site for grey seals, not least because of the absence of predators and the relative remoteness which keeps disturbance to a minimum.

Leighton Newman is a ranger on Blakeney Point: “Whilst its very busy on the reserve with over 7,000 seals currently present, including adults, there’s lots of space to support the expanding numbers.

“We’re also starting to see the seals move into different areas of the reserve, so in addition to the shallow-sloping sandy beach, more are moving into the sheltered sand dunes further inland. This provides additional protection from any bad weather, although it’s been particularly mild again so far this winter.”

There’s still another month left of the breeding season at Blakeney Point so the National Trust ranger team will wait to see what the final count brings in January.